Welcome to Grandpa's Blog! Your source for recipes, coupon codes, local retailers and everything you need to know about Grandpa Pete and his family!
Blog Home
Categories
Recent Posts
Archives

Welcome to Grandpa's Blog! Your source for recipes, coupon codes, local retailers and everything you need to know about Grandpa Pete and his family! 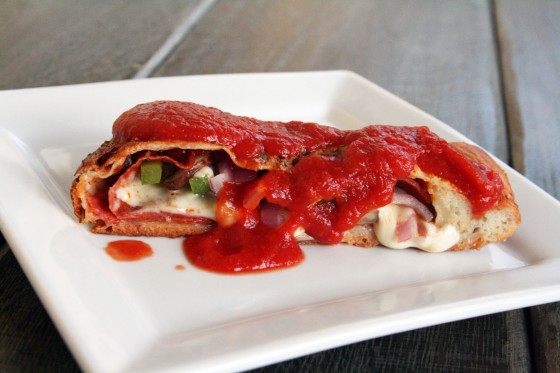 Ingredients:
1 ball of pizza dough
5 ounces sliced pepperoni
1 green bell pepper, seeds removed and sliced
1/2 red onion, thinly sliced
8 ounces mushrooms, wiped clean and sliced
8 ounces mozzarella, shredded
1 egg, beaten
1/8 - 1/4 teaspoon oregano
1/8 - 1/4 teaspoon crushed red pepper
1/8 - 1/4 teaspoon salt
1/4 grated parmesan cheese
1 cup of Grandpa Pete's Marinara Sauce
Directions:
Preheat oven to 475º with pizza stone in oven. Roll out Pizza dough to about 1/4"-1/2" in thickness. Leaving about an inch perimeter, layer on the pepperoni, sliced mushrooms, sliced onion, and sliced green bell peppers on half of the pizza dough. Top with mozzarella cheese. Fold the empty half of dough over the half with all of the toppings making a half circle shape. Seal the edge by brushing on some of the egg mixture between the top half and bottom half, and pressing firmly with your fingers. Using a sharp knife, slice some vents into the top of the calzone (about 4-5).
Brush egg all over the top of the calzone and sprinkle with a touch of oregano, crushed red pepper, salt, and parmesan cheese. Place on pizza stone and bake at 475º for 12-18 minutes; lay a piece of foil on top if it browns too quickly. Remove from oven and allow to rest for 5 minutes. Slice in strips and serve with hot Grandpa Pete's marinara sauce.
Source:mylifeasamrs.com